Home »/ What size of generator do I need? Generator Size Calculator 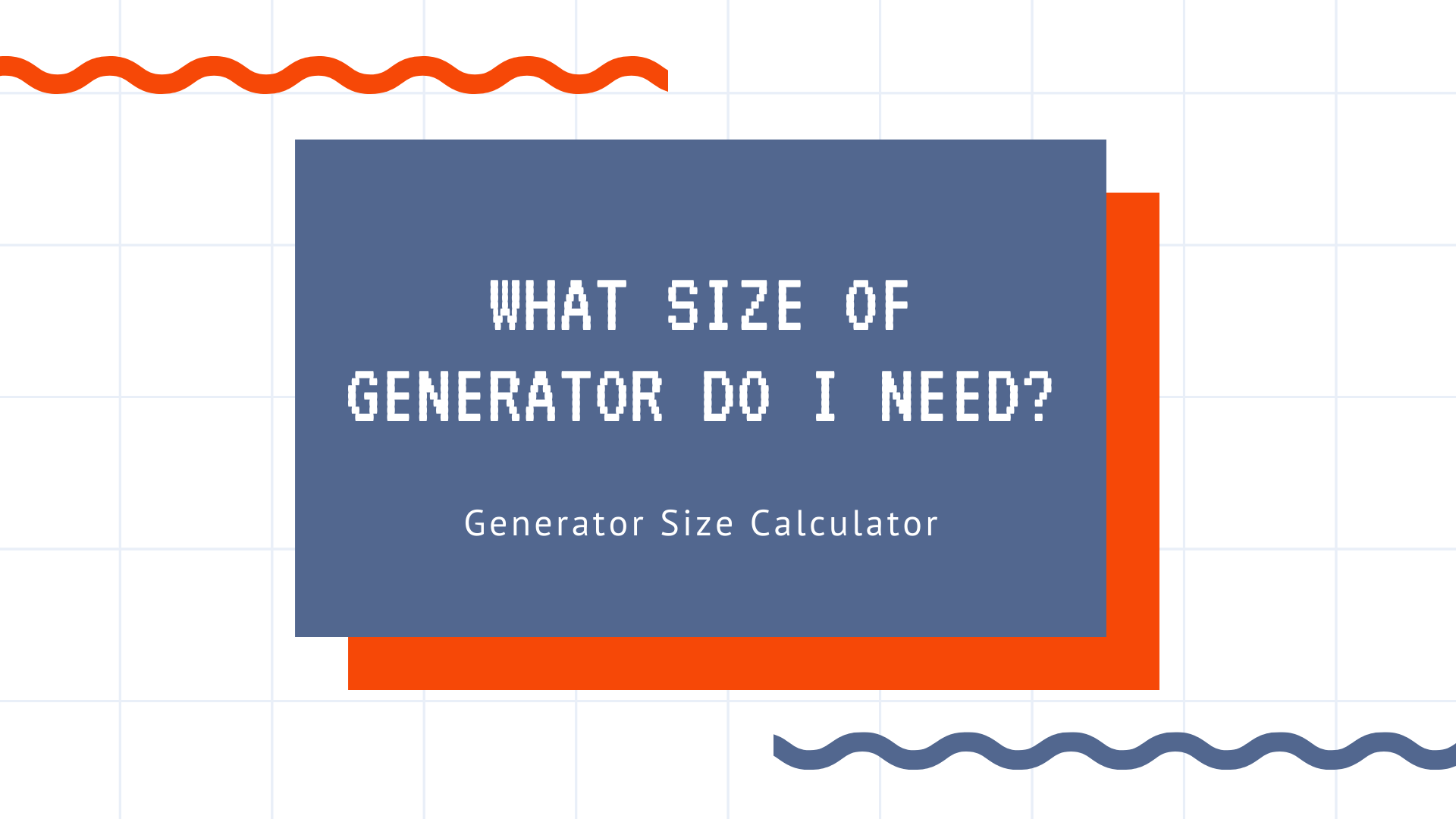 One of the most common question asked by portable generator buyers is “What size generator do I need?”. This question can oftentimes seem to be quite daunting, confusing and technical task for a common man. The answer to this question, in case for most applications, it’s actually pretty simple and straightforward.

To understand this, first you need to follow these three simple steps:

Read on for more detail to get more details for each of the steps. Please note that this article is only applicable for portable generators and not stationary generators.

Get the power information (both running and starting power) for your appliances.

List out all the appliances. Then determine the running (continuous) watts and starting (peak) watts needed for each appliance.

Starting watts (or peak watts) – this is the amount of power the appliance needs to start up.

Running watts (or continuous watts) – these mean how much energy the appliance needs to run after the initial startup.

While choosing the size of your generator, you need to pay attention to both numbers. In some appliances, these will be the same – this is for appliances such as lights, television and laptops where usually the starting and running wattage is the same.

But in lots of other cases (i.e. appliances that have electric motors or heating elements) the starting wattage can differ from the running/continuous wattage. Refrigerators, air-conditioners, microwaves, coffee machines, electric deep fryers, pumps, drill machines, grinders, electric saws etc. are common examples of such case. These appliances surge to a peak power demand then drop back down to a lower running/continuous amount because of the motors, compressors or heating elements that they have.

So where applicable, it is quite essential you obtain the starting wattage for your appliance(s), because if they draw more power when surging than the generator can produce, then you won’t be able to run your appliances.

Ensure the power information is represented in Watts

If your appliance power information is represented in the following:

Then you will need to convert these units into Watts (W). All of these are merely different units used to calculate the total power consumed or produced by electric equipment. Each appliance has its power consumption listed on its label.

An ampere (A or Amps) is a unit of measure of the power consumed or produced. If you know how many amps your device, equipment or appliance requires to run, you can easily calculate its wattage requirement too. Simply use the following formula:

A kilowatt, also abbreviated kW, is a recognized standard for measuring electricity. One kilowatt is equal to 1,000 watts

Horsepower is a unit of measurement of power, or the rate at which work is done, usually in reference to the output of engines or motors.

Prioritize & list out how many appliances you'll be running at once.

List out all the appliances with their respective the running (continuous) watts and starting (peak) watts needed for each appliance. Then rearrange the lost on the basis or priority of the appliance & how critical you believe the appliance is according to your requirements during a power outage.

Choose a generator slightly bigger than your requirements.

Why should I choose a generator slightly bigger than my requirements?

Choose a generator size slightly bigger than your requirements.

It is always a good idea to buy a generator offering some extra wattage than your need. There are a few reasons behind this:

How big of a generator do I need to run the critical equipment?

You can easily run the most critical household equipment with a generator having power capacity of 5,000 to 7,500 watts. These include things like a well pump, refrigerator and freezer, and lighting circuits. A generator with around 7500 running watts can run all these appliances at once.

For RV, a 3000 – 4000-watt portable generator would be ideal. But just to be 100% on the safe side, you should manually check the exact power requirements of each of your appliances.

But, again what one categorizes as critical equipment may vary and hence is subjective. One should follow the above mentioned process to get an exact idea of the generator size and power consumption.

Do I need the one to power the entire house or just the critical equipment?

Do you live in a disaster-prone area where power outages are a regular occurrence? If yes, then getting a larger stationary generator or a heavy-duty portable generator even though it might be more expensive, it could prove to be an excellent long term investment.

On the other hand, if you only plan to run a generator a few times a year; that too in case of sudden emergency blackout – you could save a lot of money by purchasing a portable generator capable of running the essential equipment. You don’t require an expensive standby whole house generator or a heavy-duty portable generator to power these.

Table of Contents
1 Generator Size Calculator Process
1.1 Get the power information (both running and starting power) for your appliances.
1.2 Ensure the power information is represented in Watts
1.2.1 Amphere
1.2.2 Kilowatt
1.2.3 Kilo-Volt-Ampere
1.2.4 Horsepower
1.3 Prioritize & list out how many appliances you'll be running at once.
2 Why should I choose a generator slightly bigger than my requirements?
3 How big of a generator do I need to run the critical equipment?
4 Do I need the one to power the entire house or just the critical equipment?
5 Infographic